You are here: Home / Anatomy / 9 Things Singers Need to Know About Their Bodies 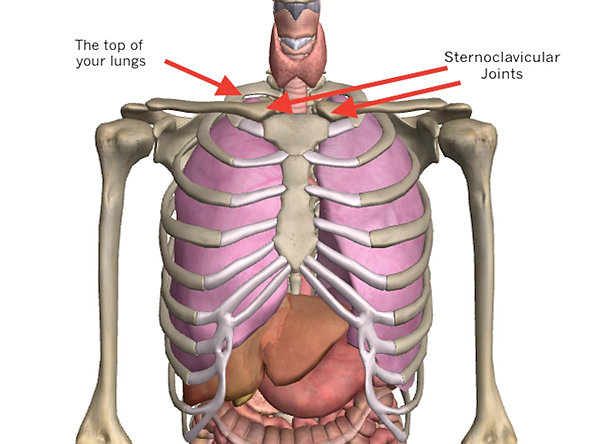 An image showing the top of the lungs in relation to the collarbone.

1.) Your whole body is your instrument, not just your vocal mechanism.

Your voice is part of a total system which includes your mind and your entire body. Any method or technique of singing that doesn’t address the total mind–body–voice system has limited applications to developing one’s full potential as a singer.

To become a better singer, shift your emphasis from trying to sing well, to using your entire mind-body-voice Self well. Once you discover your innate natural coordination, you will notice a dramatic improvement in all that you do.

2.) The poise of the head on the spine directly affects the quality of sound.

The larynx hangs from the hyoid bone which is slung from the mastoid processes on the skull. If the head is pulled down into the spine, the neck and throat muscles will be tense and the torso will become rigid. Excess tension kills vibrations and will produce a sound that is tight and strained.

Allow the head to move subtly up off the spine which lets the vocal mechanism hang freely and the breathing and support muscles of the torso work effortlessly.

3.) Pain and discomfort is caused by chronic tightening and shortening of muscles.

Muscles have only one function–to pull or contract. If a muscle remains in a state of contraction and is not allowed to release into its full resting length it will become chronically tense and inflamed leading to pain and discomfort.

By learning how to access the deep, support muscles in your body, you can relieve pain and tension by allowing chronically tight superficial muscles to release into greater length and flexibility.

4.) The more you try to control your breathing, the less control you have over it.

Breathing is automatic, reflexive function that regulates itself. By deliberately “taking” a breath we interfere with this natural function and create undue tension causing the breath to work against us.

Investigate the habits that are getting in the way of your natural breathing and learn how to undo those habits. Soon natural breathing will become a powerful ally in your singing and you will discover that you can easily “allow” for a natural, deep full breath that will give you enough fuel for even the longest of phrases.

5.) Gasping for breath indicates tension in the throat and false vocal folds.

The habit of creating a gasping sound on inhalation is an almost universal habit among voice users. Listen to almost any professional recording and you’ll most likely hear the singer make an audible sound on the inhalation. This is a sign of undue tension. Over time this habit will cause stiffness and rigidity leading to a dramatic decrease in vocal function.

Avoid this harmful habit of gasping for breath by allowing the musculature of the neck and torso to release into greater length and width.

Our ribs are spring loaded and designed for movement. They are attached to the spine via moveable joints. The ribs naturally rise and fall like pail handles if the rest of the torso is not held rigid, as is common in many singers. When we speak the ribs naturally fall at a faster rate than when we sing.

Good ‘support’ in singing relies on not allowing the rib cage to collapse during exhalation.

7.) The lungs are in the upper torso and the diaphragm sits right below them.

The lungs go as high as the collarbone and down to about the fifth rib. There is more lung tissue in the back than the front and the two-lobed left lung is slightly smaller than the right lung, which has three lobes, to accommodate the heart. Right beneath the lungs sits the diaphragm.

Many singing teachers ask their students to imagine breathing deep into their belly. This can be useful but singers should not be fooled about where the air is actually going when they breathe. It’s much higher than you think!

8.) It is impossible to directly control the diaphragm.

The diaphragm has no proprioceptive nerve endings. Additionally, the diaphragm is primarily a muscle of inspiration and consequently plays very little role in exhalation rendering the idea of ‘diaphragmatic support’ to be without basis in scientific fact.

It is impossible to exert any direct control over diaphragmatic movement except through the natural act of reflexive breathing and the the controlled exhalation of singing.

9.) By cooperating with your design you can find freedom and ease in your singing.

If you are aware, you’re halfway there! Heightening self-awareness in combination with learning about the body’s natural design can lead to dramatic improvements in vocal production and performance.

Getting clear on the architecture of the total mind-body-voice mechanism can eliminate tension, free your body and liberate your voice.

Want to learn more about your amazing human design?

Read “9 MORE Things Singers Need to Know About their Bodies“

Click here to get our 100% free “Breathing Made Simple” eBook